Bob Kelly is no stranger to hurricanes. During a six-week stretch in 2004, four hurricanes made landfall in Florida, including Category 4 Charley, which blasted southwest Florida with wind gusts as high as 145-150 miles per hour. So strong was Charley, that it picked up one of the 16 x 24-foot island greens at Heritage Palms Golf & Country Club, flipped it upside down and carried it 300 yards away from where it was anchored.

Hurricane Wilma, a once-powerful Category 5 storm, followed in 2005, and then Irma in 2017. Only one of the five floating greens on Heritage Palms’ aqua range survived Irma, which swept across northern Cuba and the Florida Keys before barreling into SW Florida and the Ft. Myers area. The rest of them sunk.

Unfortunately, Irma was just a prelude of what was to come. On September 28th of this year, another major hurricane—this one the fifth-strongest hurricane on record to make landfall in the contiguous United States—again targeted SW Florida and the Ft. Myers area. Hurricane Ian made landfall about 25 miles west of Heritage Palms, sparing the club the record storm surge to its south in the Ft. Myers Beach area, but packing wind gusts up to 150 mph and sustained winds of 100 mph-plus. The two 18-hole courses (Royal and Sabal) and the aqua range were under the intense pressure of these 100 mph winds for eight to 10 hours!

“They say with Charley, the whole storm would’ve fit inside the eye of this one,” said Kelly, the Director of Golf at Heritage Palms for the past 23 years. “That’s how big Ian was.”

Ian left just one of the large kidney-shaped greens floating on the aqua range, and it was broken in half (photo, below). The other two 16’ x 24’ kidney greens, which weigh close to 3,000 pounds, sunk to the bottom of the 38-acre lake. Of the three smaller 10’ x 15’ oval-shaped greens, two of them flipped upside down and were partially sunk, and the remaining one sunk. Kelly says that the maintenance team fished out one of the smaller greens, and all that was left were pieces of the aluminum frame. Pieces of the marine-grade flotation docks were scattered all over the 18th hole, 100 yards from the lake.

“After Charley and Wilma, we were kind of able to piece the greens back together and rebuild them,” says Kelly. “With Irma, we kept the older green and replaced five other greens. Now here we are five years later and it’s déjà vu all over again.”

Aqua Greens owner Matthew Gault, whose team rebuilt and installed the five new greens after Hurricane Irma, visited Heritage Palms and about 30 of his other aqua ranges in the area in mid-October to assess the damage. Visiting each site was like “deconstructing an airplane crash,” says Gault.

“I’m finding pieces of the aluminum frame or sections of the skirting in the water and I’m like, that’s pieces of a kidney and that’s part of an oval,” Gault says.

Gault compares the destruction of the greens at Heritage Palms to a roof being pulled off a house. The anchor lines probably snapped and the winds got under the edges of the greens, flipping them over. Once upside down, the wind load tore the flotation off the frame and in-rushing water sank them.

“The amount of pressure that must have been in that wind is just beyond my imagination,” Gault says. “This stuff is so rugged. To think there’s a wind strong enough to tear them apart is really humbling.”

Just to the northeast of Ft. Myers Beach, which many referred to as ‘ground zero’ in the aftermath of Hurricane Ian, lies Lexington Country Club. The course backs up to Estero Bay Preserve, which blankets Ft. Myers Beach. Much of the devastating 12-foot storm surge that overran Ft. Myers Beach traveled north and east across the preserve and flooded the Lexington community, including the golf course and the aqua range.

“In some of the higher areas we were fine but every piece of turf took on water,” says Joe Burden, General Manager and COO at Lexington CC.

More than 700 of the 1,479 homes in the community had water damage, says Burden. Some of the homes had a high-water mark of 56 inches, or nearly five feet. Making matters worse is the water was highly-contaminated category 3 black water, making the units inhabitable and forcing many of the homes into the remediation process.

As for Lexington’s aqua range, Burden says the rapid onslaught of water pushed two of the greens several hundred yards away into people’s backyards, with one coming to rest against a pool cage. Two other greens made it to the shoreline, although both were severely damaged and turned upside down (photo, above), and one is still unaccounted for.

“When the storm surge came in, it displaced the water in the lake,” says Burden, who’s been with Lexington CC for 2-1/2 years now. “It was coming in so fast, it pushed everything out. We had so many floater balls and regular balls in people’s backyards, that we could’ve had an Easter Egg hunt.”

What lies ahead for both Heritage Palms’ and Lexington’s aqua ranges? Both courses are still surveying the damage while weighing the costs of replacing some or all of the greens. Gault is providing estimates to his clients for both options, and it’s his goal to have new target greens back in the water by season’s end (March or April of 2023) for those venues that want them. Phase One, says Gault, is “getting back down there, flipping things over, re-anchoring stuff, and putting ranges back together that just need a tune-up.” Many of these ranges, he said, are in the peripheral areas that didn’t see the same catastrophic winds and storm surge that Heritage Palms and Lexington Country Club both received.

Of the 30 aqua ranges Gault and his team visited, he estimates that a third were completely destroyed. Much of the destruction he witnessed was similar to Irma, just not as widespread.

“Hurricane Ian, I hope, was an anomaly,” Gault says. “It was such a strong storm. I’ve never had to tour a 170-mile-long area of broken stuff like this before. It’s such a shame.”

Because of the large swath of damage, Gault also got to see much of the wreckage that Hurricane Ian left behind in the communities outside these golf courses, and it’s something he’ll never forget.

“It’s a lousy feeling, to be honest,” says Gault, “because everywhere I see my product in bad shape, I know that the surrounding area is also taken a beating. “I didn’t have to drive far to see people’s houses with their roofs torn off and tarps on things. It’s heartbreaking because you know that underneath those roofs are all the things in the world they care about. It’s sad knowing that people are hurting from it. On my end of it, I’m fortunate that it’s a golf product in the middle of a pond and if it’s broken; it can be repaired. I can replace someone’s golf target, but people got killed. Homes were destroyed. You see these workers with backhoes bulldozing this stuff into massive, massive piles. These are people’s lives they’re just bulldozing into piles and then into dumpsters and hauling away. It’s just so sad.” 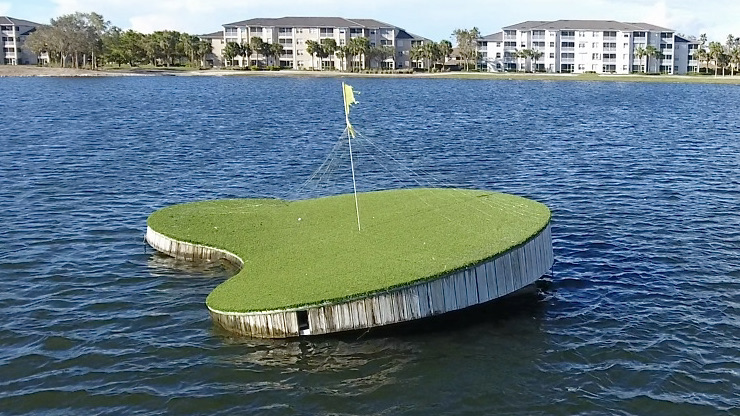